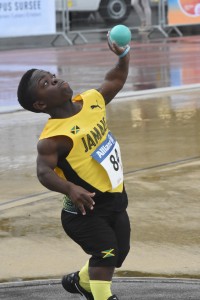 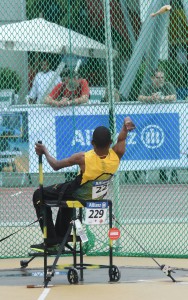 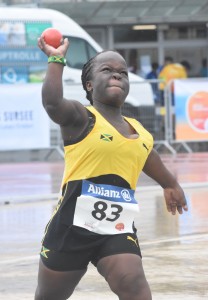 The deep rural town of Nottwil, Switzerland, will sleep peacefully tonight as the excitement brought on by the 2017 IPC World Para Athletics Junior Championships, comes to an end on the final day of competition today.

Joshua was first to take the field in the Men’s U18 Shot Put F40-F41 final and threw a Personal Best (PB) distance of exactly 7m. His effort placed him second behind Miguel Monteiro of Portugal, who threw a distance of 11.05m. He was not given the silver medal, however, as there were only two participants in the event and the rules only allowed for one medal.

“I really wanted to do well and make my country proud by winning the Gold, but I did my best, my personal best and I am pleased with that”, said Pinnock after the throw.

Fellow short stature athlete Moesha Morris, was next to enter the field and she finished 3rd in a field of 3 athletes of the Women’s U18 Shot Put F40-F41. The rules also prevented her from receiving the bronze medal.

Morris threw a distance of 5.04m, falling short of the distance thrown by Quezada Vergara of Mexico (7.09m) and Croatia’s Petra Struklec (5.26m). Like Joshua, Moesha used the championships as a learning experience and vow to return to the competition with vim and vigour.

It was a relatively productive championships for the Jamaican contingent of five athletes and this shows that the future is bright in Para Athletics for the country.

Rear day of no medals for Jamaica 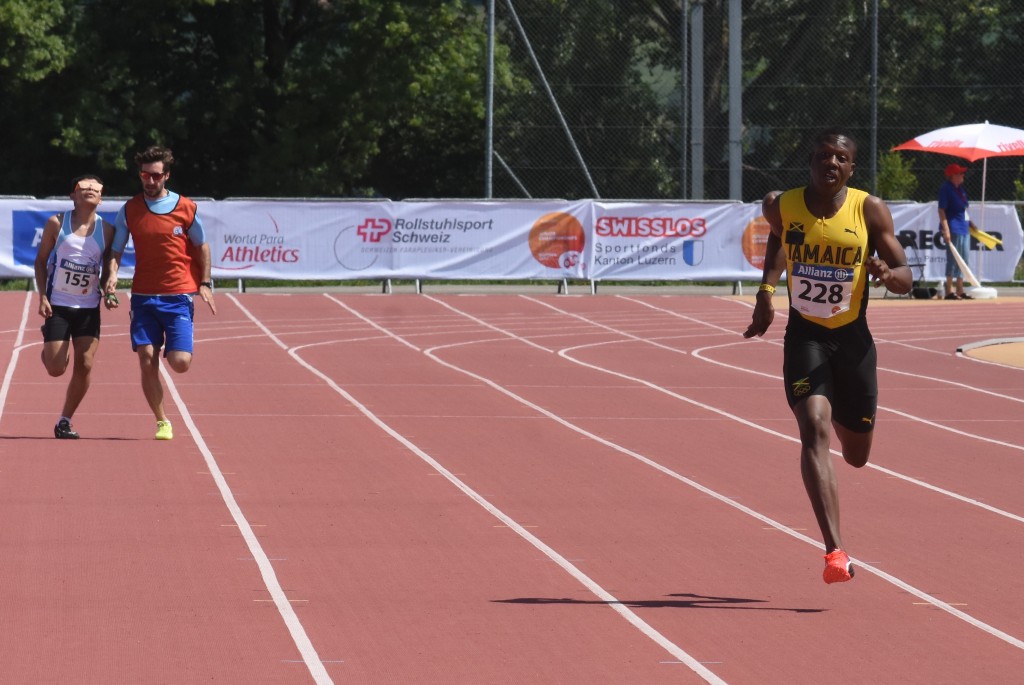 Jamaica’s lone competitor on Day 3 of the 2017 IPC World Para Athletics Junior Championships, in Nottwil, Switzerland, Jason Brown, narrowly missed out on winning another medal when he finished 4th in the 200m F12-F14.

The event was won by Jakub Nicpon of Poland in a time of 23.26s, second place went to Timothy Tanner of the USA (23.29s) while Iran’s Mehrdad Moradi, secured the bronze medal after finishing the race in 23.45s.

The powerfully built Jamaican, despite copping the silver in the 100m on Day 2, expressed disappointment with the 4th place finished but vowed to return with purpose and confidence in subsequent championships.

Jamaica is expected to increase its medal tally at the championships when the throwers bow into action on the final day (August 6).

Pinnock, one of two short stature athletes to represent Jamaica, will throw first at 9:15am (2:15am JA) and is one of 2 competitors in the Shot Put F40-F41 final.

Moesha Morris, the second of the short stature athletes, will pit her throwing prowess against two other athletes in the Shot Put F40-F41. With only the Gold and Silver medals up for grabs, Morris assured the Jamaican delegation that she intends to win the Gold. That competition is expected to start at 10:05am (3:05am JA).

Sprinters mine Silver medals for Jamaica 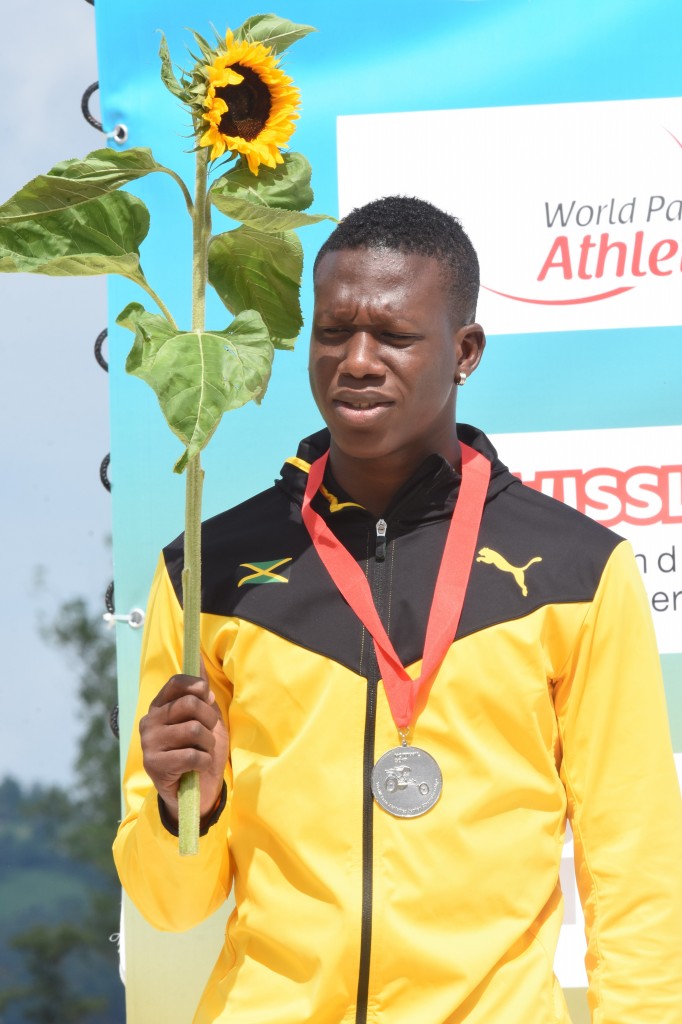 The visually impaired Jamaican got a great start and looked comfortable in the middle of the race but stumbled at the finish.

Brown has another shot at Gold when he competes in the 200m tomorrow (August 5) starting at 12:02pm (5:02am JA). He has already indicated confidence and will be looking to achieve another medal at this inaugural championship. 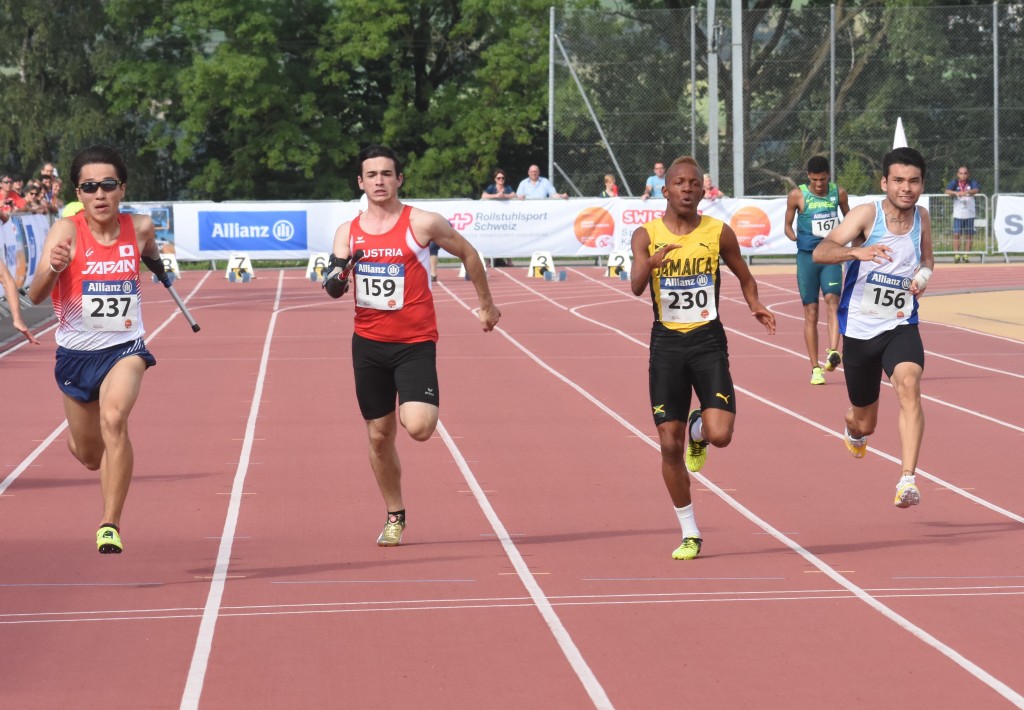 Men’s 200m T47 Bronze medallist, Tevaughn Thomas, went one better today when he won the Silver medal in the 100m in a time of 11:52s. He was beaten by Japan’s Yudai Suzuki, who won in a time of 11:30s, third place went to Alexander Potoschnig of Austria and his time was 11.60s.

Day 2 of the championships turned out to be productive for the Jamaicans as the experienced sprinters added to the medal tally and energized the other athletes.

With only Jason Brown scheduled to compete on Day 3 of the championships, there is the strong possibility that another medal is in the cards, the colour, however, is anyone’s guess. 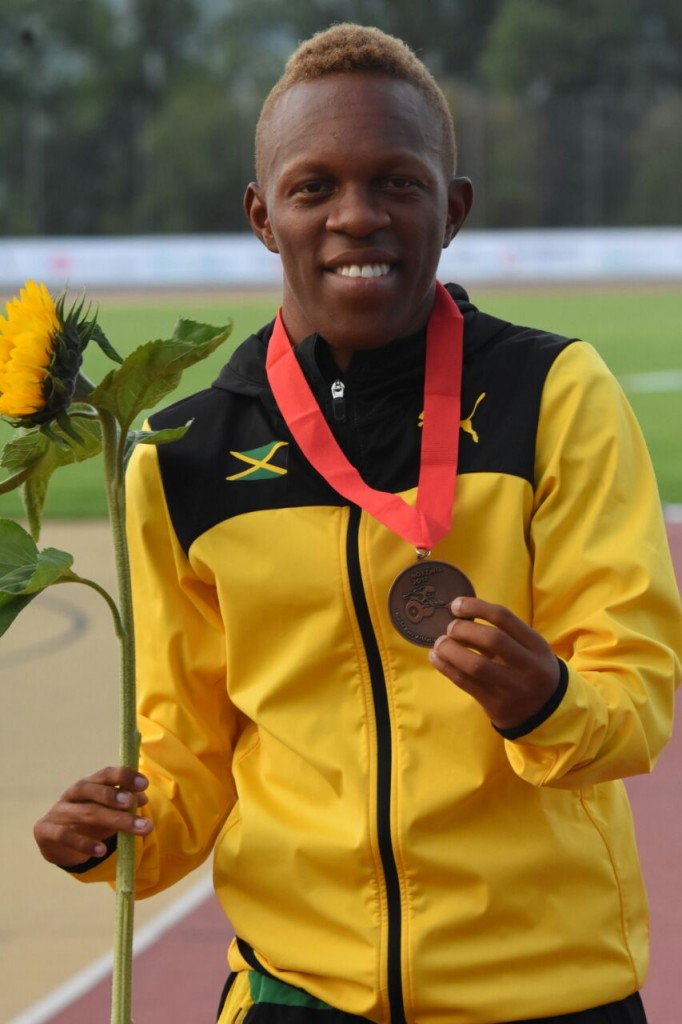 Jamaica won its first medal on the opening day of the 2017 IPC World Para Athletics Junior Championships, when Tevaughn Thomas secured Bronze in the Men’s 200m T42-47 in a time of 23.30s. He was defeated by Kumar Aamit of India, who won in a time of 23.23s and the Silver medal went to Austria’s Alexander Pototschnig, his time was 23.40s.

Thomas, who will compete in the Men’s 100m tomorrow (August 4), had a flying start and was marginally ahead of the field coming off the curve. He was eventually passed by the much stronger Indian and the fast finishing Austrian in the final 20 metres of the race.

“I had a good start and was comfortable coming off the bend, but I guess the other athletes wanted it more”, said Thomas after the race. “I am happy to have secured a medal for my country, family and fans at home”.

Earlier in the day, Jason Brown and Moesha Morris, represented the country with distinction in the Championship’s opening ceremony. Morris, who is representing the country for the first time at an international track and field event, was elated to have been a part of the ceremony, while flag bearer and medal hopeful, Jason Brown, said that it was “indeed an honour to be Jamaica’s flag bearer”.

Both Jason Brown and Tevaughn Thomas will compete in Friday’s (August 04) day of competition.
Brown will run in the Men’s 100m T13 at 11:10am (4:10am JA), while Thomas will compete in his pet event, the Men’s 100m T42-47 at 4:45pm (9:45am JA).
They are both expected to increase the country’s medal count at the Championships.
Follow the progress of the team on www.jamaicaparalympic.com and on the Jamaica Paralympic Association Instagram account.

Jamaica’s Team to the 2017 IPC World Para Athletics Junior Championships, arrived safely in Switzerland and the team is expected to light up the track in the sleepy rural town of Nottwil.

Jamaican sprinter Tevaughn Thomas is excited about competing at Nottwil 2017, from 3-6 August, which he believes is a unique opportunity to win the world junior title and emulate what his hero Usain Bolt achieved 15 years ago.

The 18-year-old will run the men’s 100m and 200m T42–T47 – Junior (U20) next week on the Swiss track. “Usain Bolt is a role model of commitment, dedication, perseverance and good interpersonal skills,” said Thomas. “I would like to win the world title like he did in order to become an inspiration for other youth athletes who strive to do their best in sports.”

“I think the Junior Worlds will be an inspiring competition. The friendship among the youths of the world can only be good for greater understanding of each other.”

Thomas made his international debut two years ago, when he competed at the Parapan American Games in Toronto, Canada. Earlier in 2017 he delivered his best performance so far by taking silver in the men’s 100m T46 at the Youth Parapans in Sao Paulo, Brazil. Now, he wants to take another leap forward at his maiden Junior Worlds. “I aim to do my very best, represent my country with pride and dignity and achieve a medal,” he said. But Thomas believes Nottwil 2017 will be important, not just on the sporting level, but also beyond the competitive field. “I think the Junior Worlds will be an inspiring competition. The friendship among the youths of the world can only be good for greater understanding of each other. Nottwil 2017 will bring us athletes closer together.” Tevaughn is still fresh from participating in the London 2017 World Championships, where he ended tenth in the men’s 100m T47. “London 2017 was enjoyable but I missed the medal presentations and playing of the national anthems in the stadium. That is an important part of the spirit of an event,” he said. “I still had a good performance but would prefer to have done a personal best in the 100m, which would have made me competitive for the final.” More information can be found on Nottwil 2017’s website. From https://www.paralympic.org/news/nottwil-2017-tevaughn-thomas-wants-repeat-usain-bolt-feat