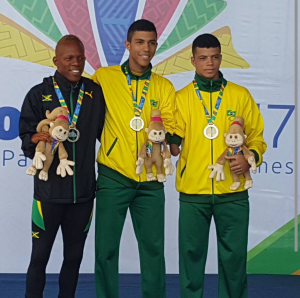 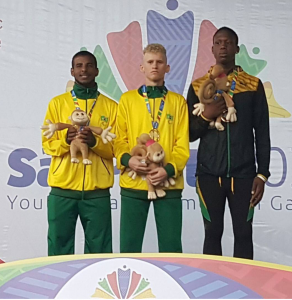 Para Athletes Tevaughan Thomas and Jason Brown earned Jamaica its first medals at an international youth games when they struck silver and bronze medals in the under 19  T47 and T12 100m events respectively.

It was a photo finish  second place for Thomas who ran on strongly in the closing stages and who spoilt the Brazilian party as he was competing in a field that had three fancied  athletes from Brazil.

“I’m pleased with the result despite my not getting the gold. Hard work has paid off and my country has a silver medal”

Brown, who only recently started para athletics, is a talent for the future and was comfortably in the bronze position. His event entailed three heats with the officials using times to distribute the medals. “This is great. God is good and I hope my country is proud” said Brown after his historic run.

‎JPA President, Christopher Samuda, who along with Kamal Powell, Director of the JPA and the Games Director,  is in Sao Paulo with the team, described the feat of the athletes as ” a tremendous display of determination, courage and talent from two fine gentlemen who remain focussed and humble”