The first day of competition in track and field at the IPC’s Athletics World Championships in Lyon, France, was somewhat disappointing for Jamaica.

Tanto “The Emperor” Campbell went into the thrower’s ring at 5:25 pm French time for the first round and with quiet confidence knowing that he had a job to do in the Discus F54-56 class.

All medals won over the years were just that: history. The time is now in Lyon and the world was looking at the present with only nostalgic memories of the past.

He hurled a personal best of 41.71m and went into the final round in third position but was unable to better his PB and maintain his bronze medal position in the final round. With the merger of classes over the last three years, Tanto, though performing at his best at the last Paralympics in London and now in Lyon, has missed out on coveted medals which would have been in his cabinet had it not been for the recent mergers of classes of persons with lesser disability to which different competition rules apply. 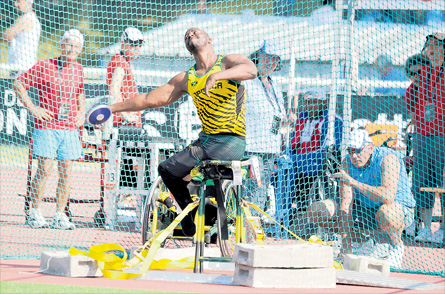 Shane Hudson and David Bascoe took to the 200m T45/46/47 semi-finals under a late Lyon sun which, unlike ours, was in full flight at 6:00pm French time with no suggestion of its setting.

David was the first in lane 3 in semi-final 1. His run was competent and he bettered his personal best by doing 23.25 but could only manage fifth which did not allow him to transition.

Shane then came and ran out of lane two. He did not execute the bend as efficiently as he normally does and lost ground in the straight to come in fifth in 23.19 thereby loosing a birth in the final. .

Both athletes will now turn their sights to the T45/46/47 400m later in the week where their performances should be stronger.