From the tender age of six, Shane demonstrated a serious love for running competitively, which to date has not waned, but rather has intensified with the successes he has earned in his amateur career. 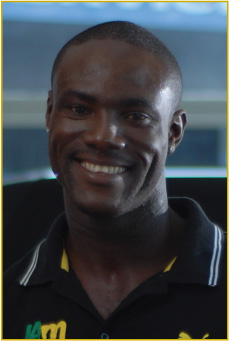 At Grayer Field Basic School, he was admired for his ability to move fast while others seemed at a stand still and this reputation followed him toMoneaguePrimary where he represented the school, while in Grade Four, in the 60m dash and 150m. On graduating to Grade Five, he participated in the 100m, 200m and 400m where he seldom was in any position other than first.

MoneagueJunior High was no different. Being the competitor he is, he represented the school, while in Grade seven, in the 100m, 200m, 400m, 800m and the relays and was its golden boy. Being the multifaceted person he is, his exploits extended to the long jump where the measure of his talentwasjust short of the length of the pit.

But it was at Ocho Rios High that others became truly appreciative of his talent as an athlete while competing at the Central Championships and Western Relays in the 200m and 400m which have now become his signature events. Medals were gained and more came when in 2006 and 2007 he represented Jamaica, as a Special Olympian, at the celebrated Penn Relays in Frankfield, in the United States, where on each occasion he ran from behind the leaders on the anchor leg to strike gold for his country.

He graduated to theparalympicmovement in 2009 and then began what no doubt would be an inspiring record in athletics.

Shane Hudson, a Paralympian with vision and on a mission.