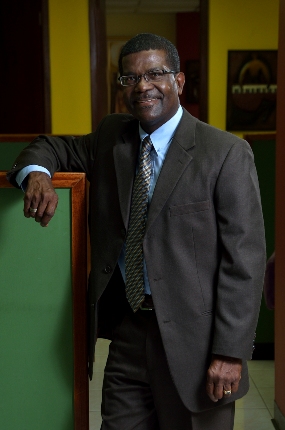 Randolph is a household name at the Jamaica Civil Aviation Authority (JCAA) having given 40 years of service in aviation in various capacities such as, Head of Special Projects, Acting Director, Air Navigation Services, Manager of Air Traffic Services and Centre Chief for the Kingston Area Control Centre. He was the first Air Traffic Controller to be certified as a Radar Controller in Jamaica.

He is a past student of Titchfield High School in the scenic parish of Portland and a graduate of the Jamaica Institute of Management (JIM) from which he holds a Diploma in Management Studies His many professional credentials include corporate planning for the public sector, which he received from the Atlantic Institute in the United States, and audit and project management obtained at the Mona School of Business.

A founding and honourarymemberof the Jamaica Air Traffic Controllers Association, he served on its executive in various capacities culminating as President of that Association.

An inspiring leader, Randolph was the runner-up Boss of the Year 2011/12 for the Jamaica Association of Administrative Professionals (Kingston Chapter) and a distinguished past President of the Palisadoes Co-operative Credit Union (PCCUL), one of Jamaica’s more successful credit unions.

A respected member of the Jamaica Rifle Association (JRA) Randolph played football competitively his last exploit being in the Civil Service League.

He is an Anglican, married and has one daughter and enjoys swimming, playing chess, lawn tennis and dominoes and is an avid fan of athletics.