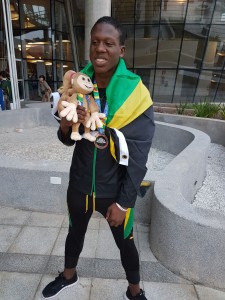 It was a remarkable achievement as ‎this is not an event that Brown runs. However, prior to the Games  he contemplated participating  in it and on his  arrival in Sao Paulo  confirmed his desire to compete to the delegation’s officials.

“I am up to any challenge ‎and this was one. I will now be able to face the 400m with confidence. It is no longer a challenge but an accomplishment but there is still work to do ” Brown said after another podium appearance.

Sport Manager, Neville Sinclair, was a proud man” I like an athlete with guts. Jason is fearless. He has just been training as a para athlete for less than six months and he now has two medals to show for his courage and commitment”.

The closing ceremony of the Games will be on Saturday evening and the team is scheduled to return next week Monday.