The morning sun distilled its Thursday rays on the Stade du Rhone where Shane Hudson and David Bascoe, semi-finalists in the T46/47 400m, contemplated their future.

The experience was not foreign for Hudson. Two years ago, in Guadalajara Mexico at the Para Pan American Games, he went through a similar thought process in the semi-finals and and then the finals where he won the coveted silver medal having yielded the gold, by celebrating too early, to a Venezuelan athlete on the line. For Bascoe, the experience was entirely new but not daunting.

Hudson went in semi-final one and it was business as usual. He pressured the first 150m, relaxed for the next 100m, executed the ensuing 100m and then for the final 50m he measuredly “shut it down” crossing the line in 49.74. 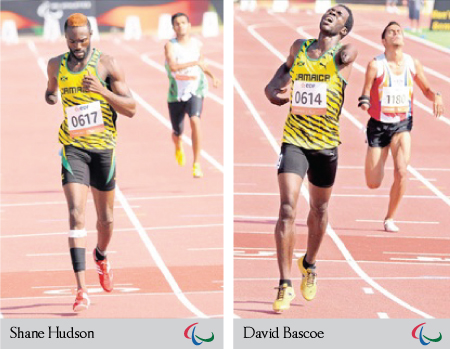 Bascoe ran purposefully in the second semi-final and only took his foot off the pedal around the 200m bend. He completed the one lap in third place in 52.09 behind Austria’s Paralympic champion, Gunther Matzinger, who stopped the clock at 49.60.

Friday’s final should be a battle to the finish line between Jamaica’s Hudson and Austria’s Matzinger. If both men remain focus and run the quarter mile competently, Hudson should prevail.

Jamaica’s hopes of celebrating two gold medals rest with Hudson and Alphanso “The Ambassador” Cunningham who should raise the national anthem, as he did at the London Paralympics last year, with the javelin in his right hand.

Coach Neville Sinclair is planning for the best in both events: “I have my hand on gold and am refusing to take it off unless the good Master says so”.