A forensic and methodical mind, practical thinking and a creative intellect do not often reside in one being but Edmund defies the odds and instills in the Paralympic movement admirable and refreshing attitudes 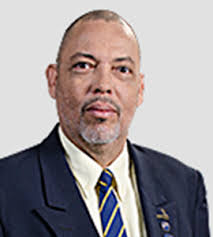 which unearth the best of human character and behavior.

A graduate of the University of the West Indies (UWI) with a Bachelor of Science Degree in Management Studies, Edmund is a volunteer at heart and currently serves as a Director of Quality Network Co-operative and First HHeritageCo-operative Credit Union. He served as a Director of the Creative Production Training Centre Limited, Governor of the Media Technology Institute and the former G.S.B. Co-operative Credit Union Limited.

Network and databases constitutehissecondlanguageandpolicymakingandstrategicplanningarecousinsofhis all of which he brings to the table of sport in a defining way.

Edmund Paralympicexperiencehasbeentremendous and one of the greatest moments occurred when he was Head of the Jamaican Delegation to the Paralympic 2015 World Championships in Doha, Qatar