Despite vigorous protests made by Jamaica and India regarding the classification of two athletes from Algeria and Tunisia who were awarded the gold and silver medals respectively in the men’s F51/52/53 discus, Alphanso Cunningham was denied a medal and officially declared in fourth position.

Jamaica and India had lodged protests asserting that the Algerian athlete should have been classified in a stronger higher class – Class 52 – as he demonstrated sufficient strength and movement of the fingers of both hands and balance of the trunk so as to exclude him from Class 51. Alliedly, the Tunisian athlete demonstrated similar strength and movement and, in addition, was somewhat ambulant which necessarily and also disqualifies him from class 51 and places him in Class 52.

Classes F51, F52 and F53 in the men’s discus competition were merged and the system which has been established by the IPC is based on points awarded which are referenced to the world records in each class. The closer an athlete throws to, or exceeds, the world record of the class in which he or she is, the athlete will be awarded more points. The distance established for the world record in F51, being a weaker class, is less than in the higher classes. 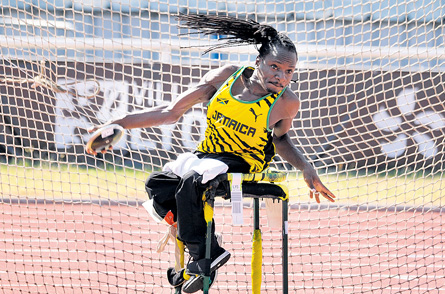 Jamaica and India maintained that both athletes should have been classified in a stronger higher class which, given the distances which they had thrown, would have accounted for less points and necessarily would have placed them out of the medal frame. The position of Jamaica and India was endorsed by other competing athletes from the USA, Croatia and Latvia but was regrettably not accepted by the Chief Classifier whose ruling has been the subject of further objection by Jamaica with the support of India.

“Disappointed but not defeated for at least the silver would have been mine” said Alphanso who threw 26.38m narrowly missing the world record by 24cm in his class F53.

President Samuda described the events as “inconsistent with the ideals and spirit of the paralympic movement and symptomatic of a wider issue regarding classification and equity which no longer can be ignored and must now be meaningfully addressed.”

Information indicates that a Petition is being circulated and signed by countries calling for changes in the rules of classification, particularly in relation to classes T46 and 47, which have been the subject of objections made by Jamaica.

“We will continue to lobby for greater equity in the rules and opportunities for athletes who are clearly disabled but who have been disenfranchised by the letter of the law which is still open to interpretation and which requires a spirit of inclusion rather than exclusion” said President Samuda.

Cunningham will on Friday enter the arena once more but this time in the Men’s F51/52/53 Javelin competition where he is expected to stake his claim.

Tuesday will be a rest day and Jamaica will resume competition on Wednesday with Sylvia Grant in the F57/58 women’s javelin.