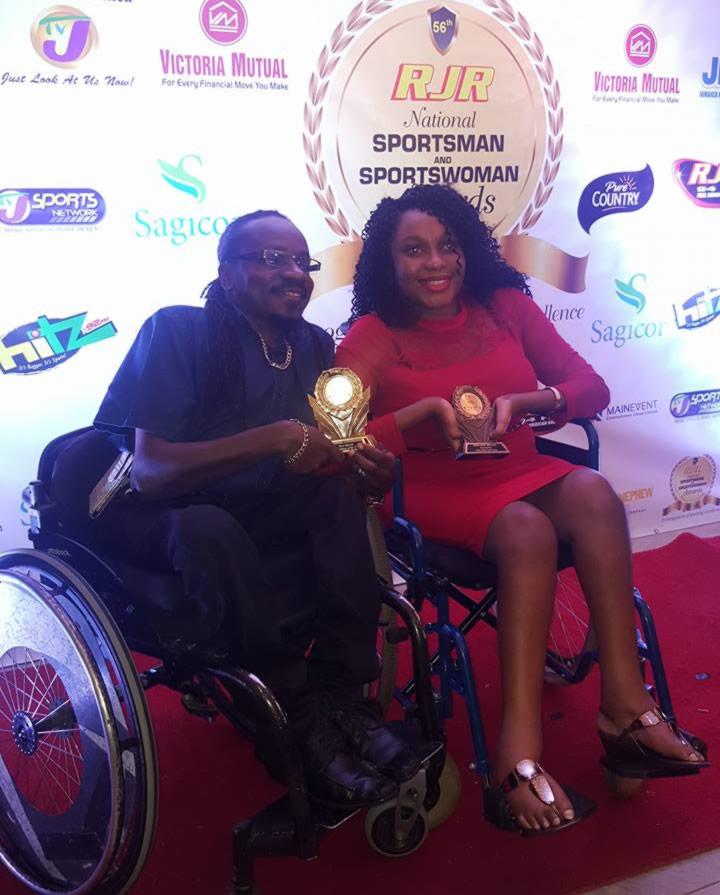 Paralympians Alphanso ‘The Ambassador’ Cunningham and Dana-Gaye Weller copped the 2016 Paralympic Awards at the recently held RJR Foundation Sportsman and Sportswoman of the Year 2016 Award Ceremony held at the Jamaica Pegasus Hotel in New Kingston.

It was well-deserved having  represented Jamaica at the 2016 Rio Paralympic Games where Alphanso did his season’s  best in the Men’s 54 Discuss.

Alphanso said: ‘It’s a good feeling again but always I am honoured’ ‎

Both athletes had a very creditable year of performances realized as a result of solid training and a disciplined ‎approach. For Dana-Gaye  ‘it was hard work that paid off’‎

‎For Dana-Gaye, it was her second;  and for Alphanso, his fourth in a distinguished record which in 2013 saw him receiving the coveted Chairman’s Award which is given, in the sole discretion of the Chairman of the RJR Group and Foundation, to an athlete, Olympic or Paralympic, who exemplifies the character and attributes of  ‎good sportsmanship and whose performance is inspiring.

‎President Samuda and Secretary General, Suzanne Harris-Henry, attended the Award Ceremony and witnessed them receiving the awards. ‎’It was expected of both athletes who continue to represent the commitment,  passion and  spirit of Paralympism’ said President Samuda.